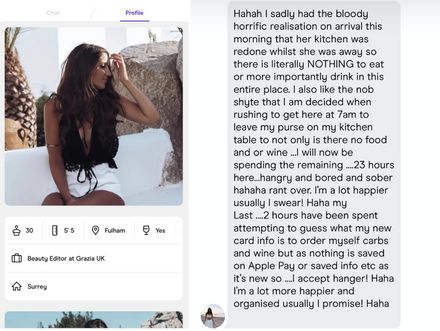 There’s a fake me on Hinge being used to scam people out of money and there’s not a lot I can do about it. Now don’t get me wrong, my quarrel here is with the lowlife that wasted minutes of their life creating this fake account, not with Hinge. I used to love Hinge in fact. It was the most aesthetically pleasing dating app around, minimalist chic I’d call it. It let me indulge my pickiness and filter my man feed like nothing else. Honestly if I wasn’t happily hooked up now I’d still be merrily swiping away.

Let me rewind back to 20th September 2020 and a very lazy Sunday morning. I’d exhausted my Instagram feed and was still craving that social-media-induced dopamine hit, so flicked through to my DM requests. I clicked the top one open and read:

‘Dear Annie, Please forgive my reaching out directly to you on here – not something I’d usually do. However, I wanted to draw your attention to something that I thought suspicious.’ Oh God. ‘I was matched with a profile under your name and with images that seemingly are of you. A little chat ensued and then I got a story that I’ve received almost word for word before and reads to me as quite suspicious. I have reported the account as I am concerned that someone is phishing under the guise of being you. This is on Hinge – I didn’t mention that. Apologies again for messaging, but felt it pertinent and polite to inform you of this.’

This gem of a human being attached a screenshot of said profile and the conversation. Fake Me’s narrative? I’m dog-sitting for a friend minus food or any means of payment – a modern damsel-in-distress style cry for dollar.

The screenshot of the conversation read: ‘Haha I sadly had the bloody horrific realisation on arrival this morning that her kitchen was redone whilst she was away so there is literally NOTHING to eat or more importantly drink in this entire place. I also like the nob shyte that I am decided when rushing to get here at 7am to leave my purse on my kitchen table so not only is there no food or wine, I will now be spending the remaining 23 hours here hangry and bored and sober haha. Rant over. I’m a lot happier usually I swear! Haha.’

Now, I’ll be honest, my first reaction was ‘nob shyte?!’ – if anything’s a red flag it’s that. My second was ‘how basic am I?!’, this situation is probable. I jump at any chance to dog sit and yes, I’d be fairly distraught if I found myself minus wine and carbs. If this isn’t proof of my innate basic-ness, I don’t know what is quite frankly. Then the real unease started to set in. This fake account had, ‘nob shyte’ aside, concocted a fairly realistic version of me and was calculatingly putting it to work with a view to leeching money from unsuspecting Hinge users.

Not only that but they were using my full name and job title in the profile too, they’d obviously done their homework. Only a few discrepancies stood out. The fake account said I was 30 (that ship sailed a couple of years ago), marked me as 5’5” (I’m 5’7”) and said I hailed from Surrey, which does a real disservice to my Yorkshire roots. Needless to say only those that know me well would be able to spot the falsehoods here. Thankfully my boyfriend is plastered all over my Instagram grid so I was confident that those who did their dating app due dilligence and background checked me would have their suspicions raised fairly early on. That or they’d later assume that I was not only a con, but an unfaithful con at that. Swings and roundabouts hey?

My first course of action was to thank my whistleblower profusely and ask him to report the page if he ever saw it again. Next I double checked that my old Hinge acccount had been 100% deleted (if you simply delete the app and don’t deactivate your account it continues to float around out there regardless). Once I was assured of that, I knew that my original profile hadn’t been hacked, rather the scammer had created a brand new account using my pictures. Incidentally this is worryingly easy to do. All a would-be-scammer needs to formulate is a private Facebook account with a few copy and pasted pictures and a fake Hinge account is there for the taking.

Next I emailed Hinge’s customer support for help and waited. As the day wore on, more messages came in. Three more wiley gentlemen alerted me to the suspicious account via Instagram DM and one contacted me on Facebook Messenger asking why I had suddenly gone quiet and passing on his number. I replied to everyone asking them to report the page, notified the telephone-number-proffering gent of the fake account and got on with my day.

Later that afternoon I received a concerned response from Hinge: ‘Hi Annie, first of all, I’m so sorry to hear this is happening to you. Members who misrepresent or impersonate others are obviously not in line with our Terms of Service let alone the atmosphere of trust that we want to foster on Hinge. For us to take the appropriate action on this profile, we will first need to verify your identity. Please respond to this email and attach a photo of a government issued I.D. such as a passport or driver’s license. Cover up any home addresses and document identification numbers.’

This I duly did and waited once more, before receiving an email a few days later that told me they could not locate the account but to ask anyone who comes across it to report it. Perhaps the reporting of the fake account had scared off the scammer behind it, I pushed the whole debacle to the back of my mind. The next day I checked my DM requests again: ‘A grown woman scamming guys for drinks. Wow. You should be proud of yourself.’ Great.

I haven’t had any further messages about the bogus account. The likelihood is that the scammer deleted the profile once it was reported a couple of times but that’s not to say the same person isn’t using somebody else’s identity for the same purpose. Hinge did all they could to help me at the time and would have launched further investigations if it had become apparent that the same fake account was still in operation.

So the moral of the story? Be vigilant whilst swiping, never transfer money to a match you haven’t met, and, if you ever find yourself having to impersonate a 32 year old Beauty Editor from Fulham, know that ‘nob shyte’ is unlikely to fit with the character brief.