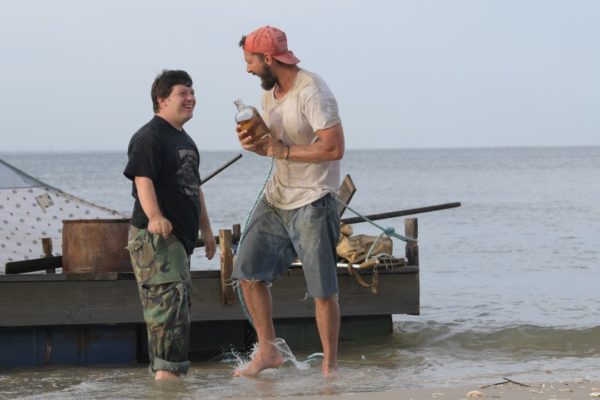 Their films are familiar to everyone, but their names are known only to those in the business. And that is just fine with them.

“Our goal, which unfortunately we’ve lived up to, is to be minimalist in all ways,” says Ron Yerxa with his trademark dry humor.

“We’ve never had a publicist,” Albert Berger adds, “but we do give an interview every 10 years.”

Berger and Yerxa are not only the principals of Bona Fide Productions; they are, except for a single hard-working employee (“at our peak we had two” offers Yerxa) the entire company.

This unpretentious size has not, however, affected the team’s ability to get films made. In their 31 years together they’ve put the Bona Fide name on more than two dozen films (the partners can’t manage to agree on exactly how many).

These include Oscar-successful films like the Anthony Minghella-directed “Cold Mountain” (five nominations), based on the Charles Frazier novel, and Alexander Payne’s “Nebraska” (nominated for six, including best picture); critical successes like “Ruby Sparks,” “Juliet, Naked” and “Bee Season,” and rip-roaring hits like “Little Miss Sunshine” and “Election.”

More recently, the partners had an unexpected success with “The Peanut Butter Falcon,” starring Shia LaBoeuf and Dakota Johnson. With more than $20 million at the box office, it became one of 2019’s top-grossing American independent films.

Like many of their films, the success of “Falcon” was far from pre-ordained. “It was a film that did not have an easy time, it was really kicked around,” says Yerxa, with Berger adding, “no festival wanted to take it [South by Southwest eventually did], no distributor wanted it.”

“So much rejection,” Yerxa admits, “it rattles you.”

Listing resilience as one of their key traits, Berger and Yerxa are at Sundance for the ninth time with their latest film, the deftly made “The Last Shift,” located in the Premieres section.

Written and directed by Andrew Cohn, it stars Richard Jenkins as a man quitting the graveyard shift at fast food emporium Oscar’s Chicken and Fish after 38 years. His unhappy replacement (Shane Paul McGhie) isn’t sure if he can last 38 minutes. Expectations to the contrary, their interaction doesn’t go at all where you think it will.

Describing exactly what a producer, especially an American independent producer, does can be challenging — “It’s my mother’s favorite question,” Berger laughs — but, sitting in their offices in Anonymous Content’s striking Culver City building, they agree to give it a shot.

First, Berger says, it’s a misconception that producers are the ones providing the money, though they often are the ones who locate financing,

Rather, producers are the people with the longest connection to the film. “We are most often the first people involved — we find the book, come up with the idea — and are the last people out,” Berger explains. “We are engaged from beginning to end, bringing everything together.”

“Last Shift” shares traits with many of the team’s productions in that “it is entertaining and very honest,” Berger says, “and it has something important to say about the times we live in, which is easier to do with an independent film.”

“Our overall impulse,” adds Yerxa, “is not to be didactic or pedantic, not to have a theme that’s pounded in.

“We want to have films that reflect some kind of progressive ideas, a view of what might be possible in life. It may be a drop in the bucket, but at least it’s a drop.”

Being at Sundance one more time is especially meaningful to Berger and Yerxa, because it was at the 1989 edition that their collaboration began.

Having just decided to join forces (Berger was a writer, Yerxa a studio executive), the two men, in Berger’s words, “stumbled into the first screening of ‘Sex, Lies and Videotape.’”

Engaging in a series of conversations with director Steven Soderbergh, they ended up producers on his “King of the Hill” and never looked back.

Berger and Yerxa returned to Sundance every year for some 20 years, meeting numerous filmmakers including Payne, whose “Election,” they produced, leading to a serendipitous connection with star Matthew Broderick’s assistant Michael Arndt, who would later write “Little Miss Sunshine.”

More serendipity resulted in their connection to “Nebraska,” whose Bob Nelson script they were sent. They in turn sent it to Payne, asking if he had any ideas who might direct. “I have an idea,” replied the Nebraska-raised director. “How about me?”

Setting that film up at Paramount is an example of why, in Yerxa’s words, “it is so hard to generalize about this business. We talk about how great it is to be independent but Paramount couldn’t have been more supportive and non-intrusive.

“So this little funky script, inspired by the writer’s family, ended up in Cannes and we ended up staying at the Carlton.