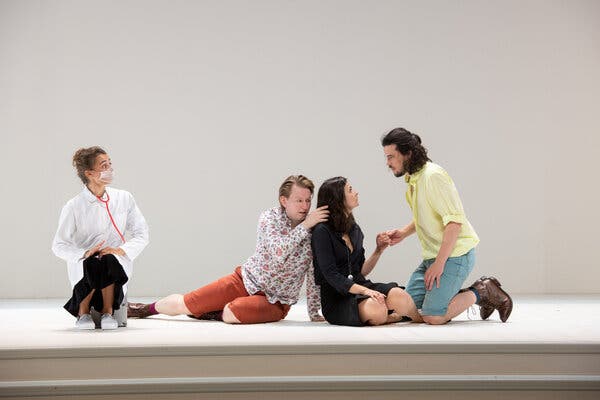 Opera Goes On in Salzburg, With Lots and Lots of Testing – The New York Times

Plenty of will — along with political and financial resources few other classical music organizations could possibly deploy — is evident here this summer. For its 100th anniversary season, Salzburg, bucking the coronavirus-prompted trend of canceling cultural events or presenting them only with onstage social distancing, is going ahead with performances featuring casts interacting closely and full orchestras in the pit.

Which is not to say the festival has been unaffected by the pandemic. A sprawling, 44-day anniversary program has been mostly postponed until next year. It has been replaced with a reduced, 30-day schedule, through Aug. 30, of concerts, plays and two (instead of seven) staged operas: Strauss’s “Elektra” and a production of Mozart’s “Così Fan Tutte” that was planned over the past few months, almost unheard-of short notice for opera on this level.

While the 90 performances will take place in a country and region where infections have ebbed and audiences of up to 1,000 — about half the capacity of Salzburg’s main theater — have been permitted, the threat remains present. On July 27, health officials announced an outbreak of the virus in St. Wolfgang, a lakeside resort town about 20 miles from Salzburg.

Markus Hinterhäuser, the festival’s artistic director, said in an interview that he felt the “sword of Damocles” hanging over the artists and staff. But in Austria, he added, “we have measures for cultural institutions — which are 200 percent necessary — that respect the health of the people working and the audience.”

The otolaryngologist (and trained baritone) Joseph Schlömicher-Thier helped form the festival’s coronavirus plan, which he described in an interview as “Fortress Festspielhaus,” a reference to the festival’s main theater. It puts in place stricter measures than the Austrian government has mandated.

The festival’s theaters will each be capped at about half their capacities; audiences will sit in a staggered, chessboard-like formation and will be asked to wear masks as they enter and leave, but can remove them during performances. Intermissions will be eliminated, and attendees will provide their contact information with the purchase of each nontransferable ticket, so that they can be informed if it turns out they attended a performance with an infected person.

Artists and staff have been divided into three groups, depending on their ability to socially distance. Singers, orchestra musicians and others who need to interact with one another closely are in the “red” group and are tested weekly, whether they have symptoms or not.

Other workers are divided into “orange” (those, like hair and makeup artists and festival executives, who must closely interact with the red group but can otherwise socially distance and wear masks) and “yellow” (those who can always socially distance and wear masks). Red and orange employees must keep logs of their health and contacts. Visitors — including journalists — must provide evidence of a recent negative test before having even distanced contact with members of the red group.

The festival has contracted with a private laboratory so that it can test large numbers of people quickly. For example, the singers, choristers and orchestra players for “Elektra,” a company of around 200, can all be tested at the same time and get results within a few hours.

“Fortress Festspielhaus” depends both on Austria’s generally strong public health system and on the festival’s deep pockets and connections. The festival’s president, Helga Rabl-Stadler, served as a prominent member of parliament for Austria’s conservative People’s Party, now in power, before joining Salzburg in 1995. (She originally planned to retire after this summer, but has committed to stay on for an extra year to see through the postponed centennial celebrations.)

“Helga here has been fantastic,” said Franz Welser-Möst, who is conducting “Elektra.” “You have to be proactive.”

And Austria may be among the only countries where classical music is a powerful lobby. Daniel Froschauer, a member of the board of directors of the Vienna Philharmonic and one of its violinists, described in an interview calling the country’s prime minister directly several times during the lockdown to plan the orchestra’s return to public performance.

“He said he’d put it on his priority list,” Mr. Froschauer said. “On top.”

The Philharmonic, the festival’s traditional house band, will play in the pit for the two operas and in a series of concerts. Its members have been tested regularly since returning to public performances for small audiences in Vienna in early June.

“Of course, if there are clusters in Salzburg, the whole thing will be canceled,” Mr. Froschauer said. “The highest value we have is our health, and we don’t want to risk that.”

Although Austria had a strict lockdown from mid-March to mid-April, Salzburg’s narrow streets — and its shops, cafes and restaurants — are now bustling with maskless patrons. But inside the festival’s facilities, said Dr. Schlömicher-Thier, “our employees are acting as though it’s still March.”

“My fear is that there could be a problem with the people outside — tourists,” he added. “I tell everyone to be careful where they go.”

While one festival employee tested positive earlier this month, the administration argues that the episode reveals the strength of the system it has put in place. “That girl was in a faraway office and had no contact with any artists,” said Ms. Rabl-Stadler, referring to the infected employee, who is currently self-isolating with mild symptoms. Ms. Rabl-Stadler added that all of the employee’s contacts were tested within hours and were found not to have the virus. The festival said it would inform the press and public about every confirmed infection of an employee, artist or ticket holder.

This ambitious plan comes with a substantial price, and just as Salzburg’s potential revenue has been slashed. The festival is giving back 24.5 million euros (roughly $28.2 million) it had sold in tickets to its original program, and has only 7.5 million euros’ worth of new tickets to sell. While Ms. Rabl-Stadler said that sponsors and donors had been generous this year, it would be nearly impossible to have another festival under the same conditions.

“Every concert is a deficit,” she said. “For opera, you can’t even talk.”

If coronavirus-related cancellations have been a headache for the opera world’s administrators, they have dealt a devastating financial and psychological blow to artists. The cast, director and conductor of “Così Fan Tutte,” which is being presented in a one-act version of just over two hours, are aware of their privileged position at a time when few can perform.

“It’s huge luck,” the soprano Elsa Dreisig said in an interview. Ms. Dreisig, who will be singing the role of Fiordiligi for the first time, had her scheduled debut in the part canceled at the Berlin State Opera in March. Now, she said, “I feel like I am part of the resistance.”

The mezzo-soprano Marianne Crebassa takes on the role of Dorabella after two of her scheduled “Così” productions were canceled — including in Berlin, where she was going to appear opposite Ms. Dreisig.

“I know I am taking a risk by being onstage with people,” Ms. Crebassa said. “But I really believe it’s important for everyone to start finding solutions. It is nice to watch streaming concerts, but after a while I got a bit depressed. This is not what we are supposed to do.”

And streaming, she pointed out, doesn’t pay the bills. Free streams, she said, were “a beautiful gesture and a gift for the audience, but I don’t believe it can last. I am in a privileged position, but if I accept being paid less because of the virus, or free streaming, what does that do for all artists?”

For Joana Mallwitz, a rising conductor who is music director of the opera house in Nuremberg, rehearsing Mozart was a welcome change from months of coronavirus contingency planning.

“Here, at the moment,” she said, “the joy outweighs everything else.”

Not that bitter “Così” is always a joyful story. Fiordiligi and Dorabella are sisters whose boyfriends pretend to go off to war; instead, they return in disguise to try and seduce each other’s girl. The women are on the verge of marrying the “wrong” men before the game is revealed.

Christof Loy, who has directed often at Salzburg and was originally scheduled for “Boris Godunov” this summer, said “Così” is closer to him than almost any other opera. Pointing to the subtitle — “The School for Lovers” — he said in an interview that “there is a very long history of misunderstanding this piece.” Many artists in the 19th and 20th centuries, he added, “treated it like a stupid comedy. It did not give justice to the deep humanity of the piece; it portrayed the women as too stupid and too cheap.”

Mr. Loy translates the characters’ thoughts and backgrounds into their distance from one another onstage. “The piece is about how distant you are,” he said. “Very far or very close. Not so much in between.” As is typical of his often visually minimalist work, the production takes place on a simple white set — though one that can open to offer a single view of a midsummer evening — and in contemporary dress.

Mr. Loy and Ms. Mallwitz began their collaboration in June with a series of long phone calls. A new production at Salzburg would normally emerge from years of planning in which conductor and director could discuss their conceptions of the work. But the breakneck planning of this staging — not to mention the cuts to the score — has not stinted depth: While Fiordiligi is often presented as a prudish caricature, Ms. Dreisig said that Mr. Loy and Ms. Mallwitz were committed to presenting every character in his or her full humanity.

“It’s a comedy,” Ms. Dreisig said, “but everything has to be done with an ethic of respecting the character you are singing, and respecting the music. It’s a true collaboration.”

One recent evening, at the first rehearsal of the work’s finale, Ms. Mallwitz led the cast through the score. Then the music stands were put away, and Mr. Loy began to walk the performers through the staging. They stopped and started as they discussed back stories and psychological motivations. Except for the masks being worn by dramaturgs and assistants, the pandemic seemed to have receded from the room.

The lovers circled each other uneasily, singing, “Repeat the joyful music, renew the lovely song, and we will sit here in the greatest joy.” Mr. Hinterhäuser, watching from the side of the room, looked, above his mask, as though he might cry.

“It’s maybe the fastest-ever-realized opera production in the world,” he had said the previous day. “Vital, fresh, unexpected. At the end, with all the risks and all the thin ice that we are on, it is important to make this try.”