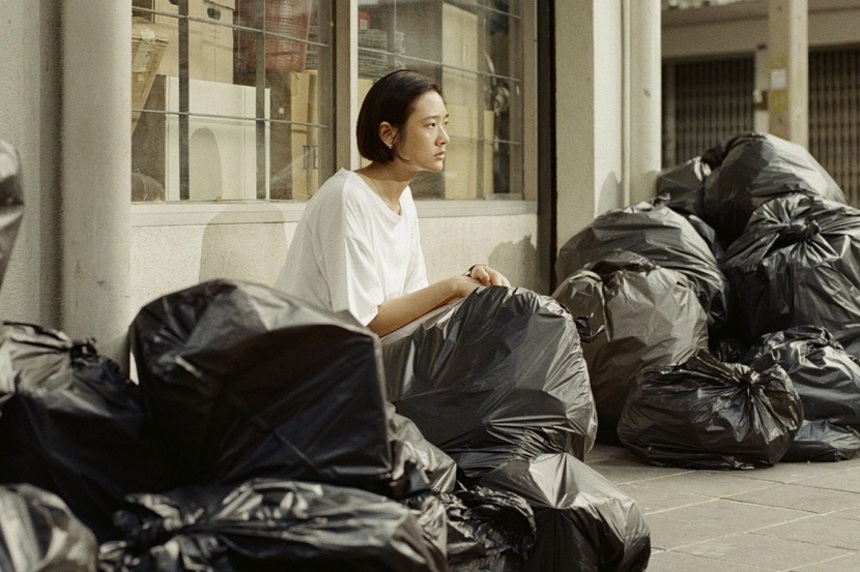 The philosophy or art of letting go; the artifice of such a belief or methodology questioned in a purposely staged environment is how Happy Old Year introduces its jaded protagonist Jean (Chutimon Chuengchar, Bad Genius). She is interviewed by a magazine about her experience studying interior design in Sweden. Having recently returned to Thailand, Jean has artful ambitions of emulating the concept of minimalism; transforming her house into a Euro-inspired contemporary deco space and nabbing a job in the process. The perceived problem, her brother, mother and a lifetime’s worth of very cluttered memories stand in her way. The real problem however is herself.

Director Nawapol Thamrongrattanarit has very loosely framed the film around the KonMari declutter method. Each step of ‘dumping’ appearing as a title card, the theme of which is barely alluded to in the scenes that play out. The ‘Tidy Goddess’ makes fluttering appearances on their TV set and Jean’s brother Jay (Thirawat Ngosawang) picks up her book and seems to take the procedure more diligently than Jean ever does, but this is not a film about following any such methodology.

Happy Old Year is presented initially as a low-key parody of the concept, one that is only half-heartedly explored before being mired in excessive melodrama. The focus stays on the pretty unlikeable Jean and her personal project to achieve a minimalist aesthetic. She agrees to the stressful timeline of transforming her home in one month without hesitation. Without communicating appropriately to anyone but her best friend Pink (Patcha Kitchaicharoen) she quickly sets to the task, the first sign of self-sabotage. The values Jean supposedly holds dear appear surface level at best and her method lacks any real sense or structure. When Pink realises she has tossed away a precious memory between them she confronts Jean who stews on this. Her guilt quickly forms into ill-advised action as Jean decides to return everything to the various out of touch figures from her past; to reconcile and dump the mental associations with the physical. Not a selfless act in turns out.

Her erratic behaviour to wipe away everything only to have it returned is frustrating, but hints at a more complex character. it becomes clear through the various interactions with former friends, colleagues and her heart-broken in-denial mother (Apasiri Chantrasmi) that Jean is an inherently selfish, bitter and stubborn person with no convictions and the actor Chutimon is very good here in portraying this borderline likeable sociopath. Jean’s methods of reconciling leads to an awkward reconnect with a former love Aim (Sunny Suwanmethanont) whom she jilted heartlessly, dumping him coldly as she left for Sweden all those years ago.

The character drama in Happy Old Year conflicts with the light parody comedy elements of the decluttering method. Jean wears the same outfit throughout, and although there is no semblance of how much time passes, the film does take place within the allotted month so it is a strange detail or lack thereof. Her brother Jay provides humorous observations throughout, and the indecision of Jean is initially framed by utilising irony in a clever and subtle way. Watching the siblings unearth old electronics, gifts, souvenirs and documents that captured a moment in the past hits pretty close to home also. These scenes any viewer could relate to, the niggling regret of actually throwing something out, the bitter-sweet reflection of something that cannot be changed. Jean is already bitter at this point, not questioning if it even ‘sparks joy’, she thinks of any excuse to dump it, a garbage bag is like a black hole, a nihilist thought she provokes herself with.

Her brother continues to pick up the cleaning slack and as the month passes Jean wanders aimlessly, distracting herself with errands from estranged friends. The title cards still pop-up, but the narrow focus on her past relationship bogs the film down in unnecessary melodrama and makes most of the aforementioned steps lose meaning. After she meets Aim and his girlfriend Mi (Sarika Sartsilpsupa), this new focus on a tame love triangle culminates is a series of long one on one conversations, artlessly portrayed with a grating music score. Some moments that move the plot forward are also jarring, such as a collector eager to buy everything Jean owns who conveniently appears when she has money trouble, as well as her friend’s bizarre request to find a digital photograph from ten years ago.

In the process of achieving minimalism Jean clutters her life with an array of complex feelings; guilt, melancholy and a compulsion to set things right.The key scene comes late in the movie, when she is flatly told she is selfish, and to accept it and continue to live her life. Jean’s habit of dumping is in fact a character trait, deflecting the real issue, which is her own to take responsibility for.

The deep irony of course is that simple is best when it comes to such minimalist-declutter aesthetics and methodology; why confuse, or complicate things? Ultimately Jean is surrounded by emptiness, which is not minimalism. It is a strong message and the final shot of the new space could have been more impactful, but like the protagonist, Happy Old Year does not know where or when to resolve, and loses its structured focus.