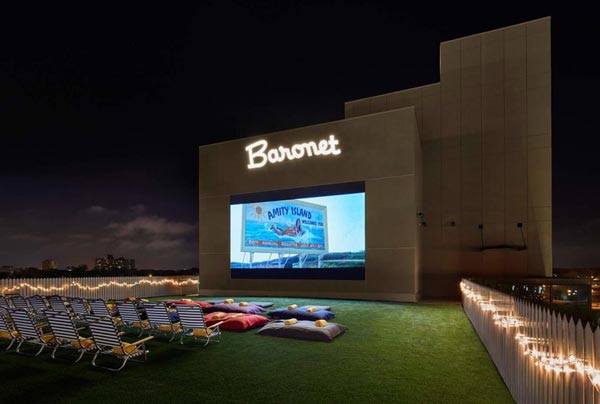 Help support local arts organizations! Check out our list of places you can donate.
Click here for the story

(ASBURY PARK, NJ) — The Asbury Hotel is screening some of the best music documentaries very Wednesday night at the Baronet, the hotel’s socially-distanced rooftop movie theater.  Doors open at 7:00pm and movies start at sunset. Chairs are first-come, first-serve, and can be limited on busy movie nights. We encourage guests to bring their own beach chairs and blankets. Titles to be screened include Joan Jett: Bad Reputation, All I Can Say (Blind Melon), End of the Century: The Story of The Ramones, and Amy (Amy Winehouse).

A concession stand with snacks and canned soda, wine, beer, and cocktails available for purchase. Credit Card only. Tickets are $10 for the screenings with the exception of All I Can Say, which is $15 and includes a Q&A after the film with Danny Clinch.

August 5 – Joan Jett: Bad Reputation.  A journey through Joan Jett’s life and career, from her early years as founder of “The Runaways” and first collaborations with Kenny Laguna to her status as rock icon.

August 12 – All I Can Say. Shannon Hoon, lead singer of the rock band Blind Melon, filmed himself religiously from 1990-1995 with a video camera, recording up until a few hours before his sudden death at the age of twenty-eight. His camera was a diary and his closest confidant. In the hundreds of hours of footage, Hoon meticulously documented his life—his family, his creative process, his television, his band’s rise to fame, and his struggle with addiction. He filmed his daughter’s birth, and archived the politics and culture of the 90s, an era right before the internet changed the world.

Created solely with his own footage, voice, and music, this rare autobiography is a prescient exploration of experience and memory in the age of video. It is also Hoon’s last work, completed twenty-three years after his death. This event will feature a Q&A with Danny Clinch after the film.

The article continues after this ad

August 19 – End of the Century: The Story of The Ramones. Joey, Johnny and Dee Dee — better known as The Ramones — changed the course of rock history with their rebellious punk ethos and minimalist approach to songwriting, and in the process became counterculture icons. “End of the Century” follows the Queens kids from their earliest underground gigs in the 1970s to their induction into the Rock and Roll Hall of Fame in 2002, featuring rare archive concert footage and candid interviews with the band members.

Enter through the center set of exterior doors at the Asbury Hotel. Space is weather-dependent. Please check Facebook events for updates regarding cancellations. All sales are final, sorry, no refunds.

The Asbury Hotel is located at 210 5th Avenue in Asbury Park, New Jersey.