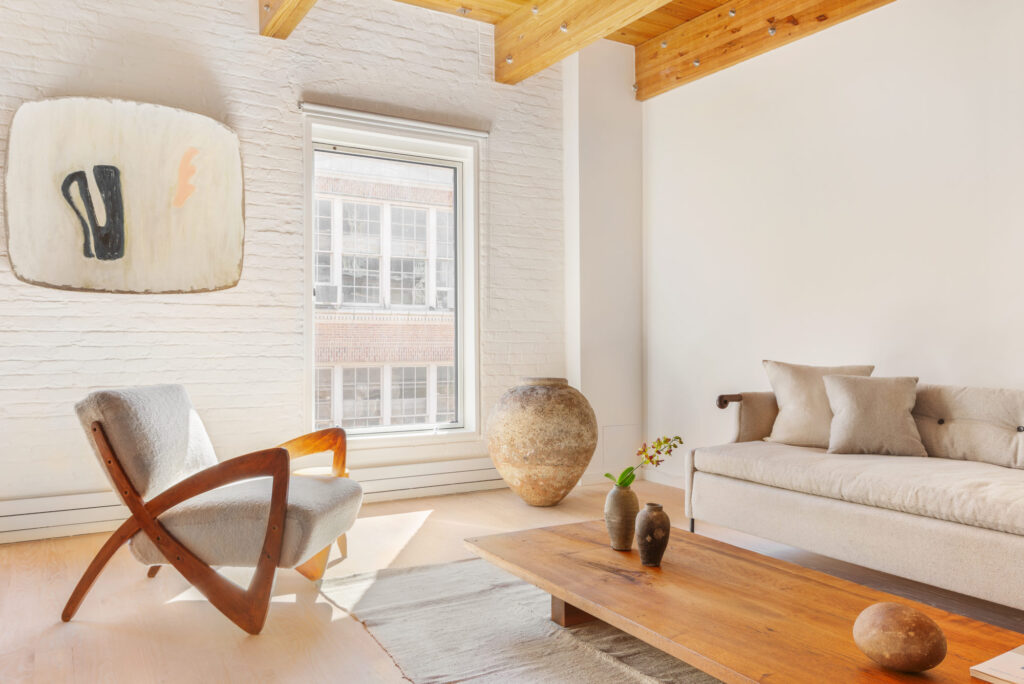 Nick Gavin lives the mantra “New York or Nowhere.” The real estate broker, 38, was raised in SoHo in the ‘80s and ‘90s and has been a downtown loyalist ever since. Back then, SoHo was less a bustling high-end retail district and more of a community filled with familiar faces and neighborhood camaraderie—dynamics that still exist in nearby Chinatown, where he and his wife, the German-Dutch model Katrin Thormann, and four-year-old daughter have called home for four years. “Chinatown feels like New York City, it has character,” Gavin says. “You see the same people every day, you know, that live on the block and in the neighborhood. It’s a different vibe.”

Growing up in SoHo during that time period, Gavin was exposed to the prevailing bohemian spirit that took hold when artists transformed vacant industrial lofts into studios. “My parents lived there in the ‘70s when there weren’t any streetlights,” he says. “It was kind of a rough neighborhood, but the creativity was there.”

Gavin developed a taste for idiosyncratic living spaces, which eventually drew him to 136 Baxter Street, a duplex he calls “a little Scandinavian house” for its restrained design and rustic touches such as exposed Southern Yellow Pine ceiling beams. With the help of friend and interior designer Pali Xisto Cornelsen, the conventional loft aesthetic of cast iron and moody color palettes was given a bright and airy facelift—blond oak floors, neutral tones, and whitewashed brick walls now set the stage for minimalist furniture and bold contemporary art.

Throughout the condo, which sits on the fifth and sixth floors, New York City references reveal themselves. Downstairs, the main bedroom is outfitted with Donald Judd side tables and a low-lying bed inspired by the artist’s plywood design. In his daughter’s room, softly curved furniture pieces come from the neighborhood concept store Clic. A transitional space doubles as Gavin’s office, which showcases an artwork by the poet and painter Rene Ricard on Vitsoe shelving.

A work resembling a canvas saddle by Ron Gorchov, the late New York artist known for his vibrant concave paintings, presides over the living and dining room, where a minimalist teak coffee table, Pierre Chapo dining table with Charlotte Perriand chairs, Pierre Jeanneret’s Easy Chair, and an assortment of ceramic vases are bathed in natural sunlight.

Speaking of saddles, the condo is one of 12 residential units occupying the Machinery Exchange, which was built in 1915 as a horse stable for the Police Building, the Beaux-Arts grande dame one block away. Developed by the estimable contemporary art and architecture dealer Max Protetch, who tapped architect Mark DuBois to revamp the pre-war edifice in 2007 when it was being used as a warehouse, the facade still bears the faded painted name, original arched windows, and the patina of history. “The newer buildings have all of these amenities and pools and gyms, but ours is kind of back to our own style. It’s restrained and not over-designed,” Gavin says. “It’s becoming harder and harder to get these types of places.”

Given his adoration for the neighborhood and his Scandinavian-style sanctuary, it might come as a surprise that Gavin’s apartment is currently for sale. His friends and family wondered if he was joining the great migration out of the city during COVID-19, off to his second home in Shelter Island or some other suburban refuge. “I’m actually trading up and doubling down on New York City,” he says. “I’m more committed than ever.”

Where’s he headed? A bigger apartment in the same building. “It’s such a gem—a beautiful corner brick building on a Chinatown block nobody knows about. Not even cab drivers know where it is. It’s pretty cool.”

Surface Studios is the brand marketing unit of Surface Media.