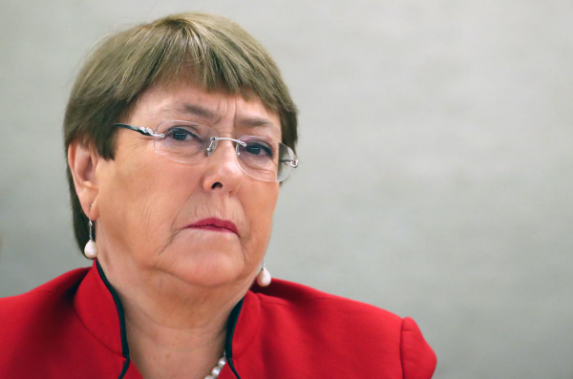 The United Nations’ top human rights official Michelle Bachelet called on Israel on Monday to halt its “illegal” plans to annex parts of the West Bank and warned it could lead to deadly clashes.

“Annexation is illegal. Period,” Bachelet said in a statement. “I am deeply concerned that even the most minimalist form of annexation would lead to increased violence and loss of life, as walls are erected, security forces deployed and the two populations brought into closer proximity.”

The Foreign Ministry in response, dismissed Bachelet’s remarks and accused her of politicizing her post.

“This isn’t the first time that High Commissioner Michelle Bachelet has used her role to politicize the commission against Israel, while exhibiting a unilateral approach. Therefore, it’s not surprising that she decided today to join the Palestinian campaign against the American peace plan and to come out with declarations before any decision has been made on the matter,” a ministry spokesman said in a statement.

“Israel long ago lost faith in the ability of the commissioner to advance human rights in our region in a fair manner,” the statement added. “The ministry already mulled the decision to freeze ties with Bachelet earlier this year for publishing a list of companies that do business in settlements.”

The upcoming move is part of U.S. President Donald Trump’s Middle East peace proposal unveiled in January, that envisages that the United States would recognize the Jewish settlements – built on land the Palestinians seek for a state – as part of Israel.

Prime Minister Benjamin Netanyahu’s plan to extend Israeli sovereignty over Jewish settlements in the territory has drawn condemnation from the Palestinians, U.S. Arab allies, and other foreign governments. The Cabinet is due to begin formal annexation deliberations on Wednesday, July 1.

However, sources within the Blue & White party, which is part of a unity government with Prime Minister Netanyahu’s Likud party, said that its leader, Defense Minister Benny Gantz, told U.S. President Donald Trump’s adviser during a meeting on Monday that the July 1 deadline was not set in stone, with coronavirus taking the national priority.