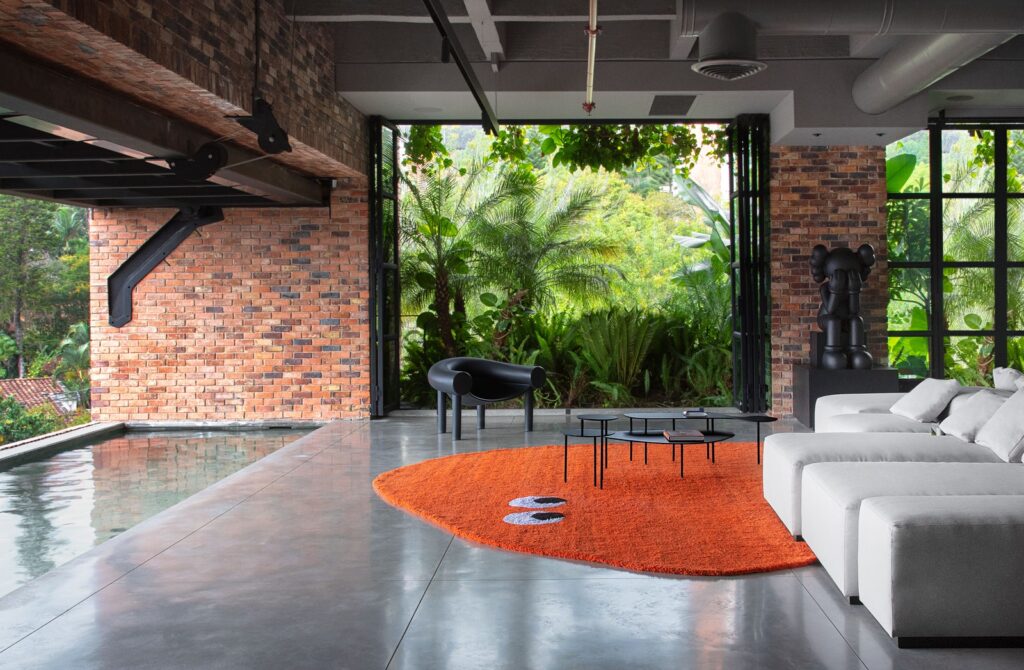 Nobody rocks a tie-dyed ensemble and rainbow-colored leopard-print hair quite like Latin music superstar J Balvin, a.k.a. Jose Alvaro Osorio Balvin. The record-breaking Colombian singer sported the natty look at the 2019 iteration of Coachella, delighting legions of fans obsessed with his addictive reggaeton beats as well as his intrepid fashion sense, which runs the gamut from polychromatic streetwear to haute couture. Those same fans might be surprised to discover that on the home front, Balvin eschews giddy theatrics and prismatic finery in favor of minimalist cool and Japanese-inflected decorative restraint. His loft in Medellín and his country retreat in Llanogrande, 30 minutes from the city, are object lessons in the poetics of simplicity.

“Architecture, music, fashion—they’re all forms of expression. When it comes to the places I live, I definitely take aless-is-more approach,” says the Latin Grammy Award– winning artist. “A house should be a place where you can rest your spirit. I’ve tried to create places that feed my soul, not my ego,” he avers.

Balvin’s town and country residences were both designed by the Medellín-based firm 5 Sólidos. The numerical designation signifies the company’s holistic approach, encompassing interior design, architecture, branding, project management, and furniture design. “Honestly, I could have called anyone in the world. But I chose 5 Sólidos because they are based right here in Medellín. I love their young spirit and their passion. Latinos have beautiful taste, and we understand the meaning of lifestyle,” the singer insists, echoing his long-standing crusade to promote Colombian artistry and Latin culture around the globe.

“Jose is very demanding. He has a clear idea of what he likes and how he wants to live. You see it reflected in the artwork he collects, the books on the shelves, the neutral palette—every detail down to the sheets and towels,” says Elisa Ortega, one of three partners in 5 Sólidos. Daniel Correa, another partner, adds, “We designed these places as refuges for Jose, where
he can simply relax or hang out with friends. There is not a lot of visual noise.”

The Llanogrande home—which will eventually become a guest cottage within a larger residential compound that Balvin is now building—is quietly nestled in an intoxicating jungle landscape. The team at 5 Sólidos completely gutted an existing house and then reimagined the structure as a serene, understated pavilion, where architectural elements such as blackened wood siding and shoji-like framed linen doors and screens point to the influence of Japanese aesthetics. Exquisite bonsai specimens underscore the affinity. Meanwhile, the warm, luminous planes of French oak that wrap the interiors, coupled with an array of pared-down modern furnishings, add a note of Scandinavian grace to the composition. The only eruption of color occurs in Balvin’s closet, where about 850 pairs of sneakers (a mere portion of his king’s ransom) are displayed in what looks like the world’s dopest shoe museum.

A deck connects the house to a swimming pool that splashes down to a lower-level reflecting pool bracketed by alfresco dining and lounge areas. “Water calms me down. I love being out there, especially at night, surrounded by the trees and the darkness,” Balvin notes.

Water again comes into play in the singer’s Medellín apartment, where a private pool—every unit in the seven-floor building has one—opens to the outdoors via a hefty garage door. “I’ve always been fascinated by the idea of a New York loft—the original loft,” Balvin says, describing the home’s high, exposed ceilings, concrete floors, and rugged aesthetic. “This is my man cave, a place where I can vibe with art and architecture, the things I love,” he continues.

Correa seconds the notion. “Art is really the protagonist here. There’s lots of color in the pieces Jose collects, so he wanted a very muted palette to keep the focus on the paintings and sculpture,” the designer says, noting signature works by KAWS, WhIsBe, Josh Sperling, and Takashi Murakami. A custom display cabinet housing three of KAWS’s Companion sculptures provides a visually permeable boundary separating the bedroom from the main social area of the loft, which is centered on a giant sofa and a groovy, free-form orange carpet that nods to the artwork from Balvin’s Vibras album.“The only real door in the loft is the one to the bathroom.
The idea was to keep the space as open and fluid as possible,” Ortega explains.

Balvin, who recently launched a capsule fashion collection with Guess, would eventually like to flex his increasingly honed design and architecture muscles in the hospitality arena. “I just love the process. It would be amazing to create special hotels of ne art and style, something with an Aman vibe with contributions by people like KAWS and Murakami,” says the Colombian phenom. “Their work makes me feel like I’m a kid again, laughing on the playground. That’s a great feeling.”