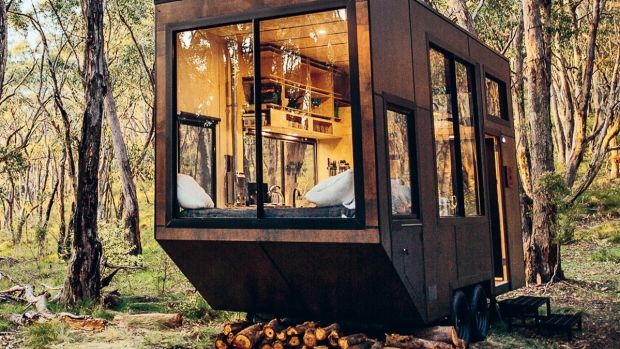 The latest book to capitalise on our cosy imaginings, Living Little, by Australian author , is a lavishly illustrated compendium of miniature paradises, from flats to cottages, cabins to container-dwellings, some as small as just 12 square metres.

That particular micro home, the Casa Parasito, is an A-frame structure, sitting on a rooftop in San Juan, Ecuador, that manages to pack in a kitchen, dining table, bathroom, bed and work area. There’s even a spot of storage. Of course the main attraction of a tiny home is its lower cost: many people live small because they quite simply can’t afford not to. But a further lure is the idea of paring back, decluttering and making do with less. Jenkins describes how, as the minimalist movement has gained traction, it has brought with it an increased appreciation for small and innovative spaces.

A common reason, she says “is the recognised value in questioning what one truly does and does not need to live,” which brings with it the chance to re-examine what it means to be successful. Think about it: if you can live with less, you can spend more time on what you really enjoy.

“Ideas such as these,” writes Jenkins, “put under review the status quo and make us question whether preconceived notions about the types of dwelling we aspire to have, not to mention the number of objects within them, are really in our best interests.”

But can a tiny home work for family life? “It can,” says Jenkins. “However, it needs to be very well designed and ideally merged with the outdoors. Children need space, particularly in nature.” She cites the Unyoked properties as favourites. Described as “an ancient remedy for modern times,” brothers Chris and Cameron Grant of Unyoked (unyoked.co), have created a series of off-grid cabins for holiday rentals “to remedy the over-stimulation of everyday western life, which,” says Jenkins “is so fitting in a time when we’re being forced to reconsider the way we live.”

But it’s not all about getting back to nature. “For singles or couples,” Jenkins says, “small homes are wonderful, particularly in urban or rural settings where the space itself is only one aspect of a broader lifestyle.”

The lifestyles shown in Living Little are decidedly aspirational. From the log-chopping and kindling gathering at the Unyoked cabin, to the attractive couple swapping coffee in their Amsterdam apartment (Egons Loft), to the bikini clad model lingering on the stairs in Portugal’s Beira Mar House, it’s easy to begin to believe that tiny houses are homes of great beauty and happiness.

But what about all our clutter? I mean, stuff itself isn’t inherently bad, and objects clearly bring joy, or we wouldn’t acquire them in the first place. The key, says Jenkins, is being a bit more discerning in what you gather.

“There’s clutter in the literal sense of the word, which is definitely not ideal in a small space, but then there’s tactful clutter, which can add a sense of warmth and personality to a space, whatever the size.”

Here, it’s worth looking at Sophie Ashby’s London apartment (Television Centre), where the designer hasn’t stinted on wonderful artworks and marvellously eclectic furniture – it just all works really well, because she obviously has such a good eye.

Flicking through Living Little, looking for inspiration for my own very small home (it’s just under 40sq m), there are plenty of ideas to steal. I love how the levels are split in the Tel Aviv apartment by Nitzan Horovitz, and how everything, from the sofa to the bed, pulls out and packs away in Studio Wok’s 28sq m Batipin Flat in Milan, described as “the world in one room”. Similarly, clever block work makes for a compact staircase in the Casa de Monte in Mexico.

But there are irritations. An Apple computer monitor sits elegantly on a yellow ledge in a chic Paris apartment, but where’s the keyboard? And I have never seen a kitchen with fewer implements, bottles and condiments than that coffee loving couple in Amsterdam’s Egons Loft seem to get by on.

Similarly some of the language is a little “architect-y”. The Beira Mar House, “is clad protectively with plasterboard that is painted dark green, rigorously shielded for its new and invigorated lifecycle.”

Meanwhile, for Portugal’s Architectural (Dis)Order house, “Inside a white box, three differently configured yellow objects have been individually placed. The idea behind this abstract design concept was to challenge, and dramatically alter the occupant’s experience of a previously empty space.” Indeed.

“Tasked to evoke questions of significance,” the text continues, “the bold forms can be interpreted in a myriad of ways. Are they an abstraction of classical architectural elements? A sculptural piece in what might actually be considered a gallery? Or do they simply hold value only as functional objects, like pieces of furniture?” Well, you have to wonder…

On the other hand, there are floor plans for every space, and plenty of bright ideas to steal. Mini shelves as bedside tables, storage alcoves, bed platforms with more storage underneath, bright blocks of colour, bicycle hooks on walls, partitions rather than walls to maximise light, and several genius solutions for staircases in tight spots all inspire a desire to imitate.

But do people who live in small houses, even ones as gorgeous as the ones in Living Little, dream of bigger homes? “Everyone tends to fantasise about what they don’t have,” says Jenkins. “But a small space can be equally as fulfilling as a large one. It’s not about the space itself but the type of lifestyle it bolsters.”

Of course, one of the biggest enforcers of change in lifestyle is currently Covid-19. In Ireland it has made us look at both inside, and outside in a whole new way. “It has forced people to reflect on the type of lifestyle they were leading before the pandemic,” agrees Jenkins. “And the type of lifestyle they might aspire to after it. And with that comes a deeper appreciation for the spaces we inhabit, and perhaps a desire to make them more efficient and pleasurable.”

As we come into winter, many of us dread the thought of being forced inside, through a combination of potential further lockdowns, and foul weather. But take a look at Cabn Jude in Australia, to see how fabulous a fire pit and winter barbeques could be.

Another Covid-19 change has obviously been the move to working from home and the creation, for those who have the space, of garden rooms and garden offices. For this, you have a choice of inspirations in Living Little. There’s the cosy Flexse, a mini cabin in St Petersburg, that can be plopped down anywhere – even on piers in water.

Or the brilliant San Juan Tiny House in Colorado by Rocky Mountain Tiny Homes, which can be hitched to your car, and towed to a new spot at will (yes, I know, we call them caravans – but this one is truly cool). But, if I could choose, my dream work space would be designer Christina Salway’s Glasshouse Treehouse in New York’s Catskills. Perched on stilts, it has been created entirely from salvaged and mismatched windows and doors – although I’m not sure how much work I’d get done there, there are so very many windows to stare out of…