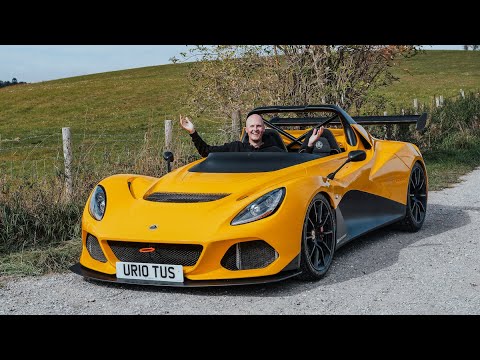 They say that carmakers don’t make cars if there are no customers for them. But that’s one way of putting it, because I really don’t think many people were asking BMW to chop the roof and back of the X5 and give them an SUV with less rear space and a reduced trunk… And yet, they made the X6.

Now, the same cannot be said about speedsters since they’ve been around for way many more decades. But, with declining roadster numbers – the segment has been hit by the popular success of the crossover SUV just like sedans or minivans – it’s rather odd that you would have so many choices at the higher end of the spectrum.

And, yet, there is Aston’s V12 Speedster to consider, the McLaren Elva to ponder, the Ferrari SP1 and SP2 Monza to marvel at. Even Lamborghini seems to get ready to join the high-end speedster party if we are to believe its Squadra Corse division.

Of course, each and every one of them is dedicated to the elite. Sold in very low numbers – 88 for Aston, just 149 for McLaren (don’t even dare to recount how many Ferraris – it was 200 if I recall correctly). So, they’re not going to have a big impact on sales statistics for the two companies. Instead, they bode very well for the carmaker’s name.

And that’s a big driving point for these automakers – the name sells very well, after all. Besides, everybody loves special series. Although we are social animals, an important part of our nature has to do with individuality. In every form and across vast expanses of space – that was the driving point that brought the human species to this era of incredible technological breakthroughs.

But carmakers also have a knack for asking way too much money for something that may or may not become a black hole for the future owner. Just because the V12 Speedster, Elva, or the Monzas lack certain body components do you think the brands are going to charge any less for maintenance and spare parts?!

Well, I say that anyone can have the same crazy experiences, for much less money – for example, the V12 Speedster costs £765,000 ($997,000). Sure, it’s not going to be dirt cheap, unless you start chopping the roof and doors of your own car. You could certainly do that, but that’s besides the point of our discussion – and directly into full customization territory.

But what I mean is that anyone can have an affordable other-wordily experience (better wear a helmet, otherwise you’ll gather up some unwanted insects in high-speed impacts) that is not only exciting, but also safe… as far as a windowless, doorless, roofless car is concerned. You get the point, right?

Well, everyone knows about Jeremy Clarkson’s experience with the Ariel Atom. How could we forget the flappy face – it’s going to be forever instilled into popular motoring culture. But there are also other options.

If you don’t want to wear a helmet every time you go out on a Sunday drive, then probably one of the safest bets would be to go for the minimal roadster experience – and you can never go wrong with a Mazda MX-5 Miata. It’s the pinnacle of minimalist open-top expriences, and has aged so gracefully that even kids can recognize one irrespective of the generation.

Sure, if the package os too bare-bones for you, I have another personal recomandation – albeit one that it’s only partially prone to expose you to the elements. It’s the ubiquitous German sports car, the 911, in Targa form. And, if money is no object, I would go for a Singer-type reincarnation of an air-cooled generation for vintage flair combined with modern driveability.

But, as I said before, we’re looking for more affordable options here. So, we’re back to the British options, because they do know how to make a specialty automobile. So, the BAC Mono would be an easy choice, but this video from Seen Through Glass (embedded below) reminded me of something even more interesting.